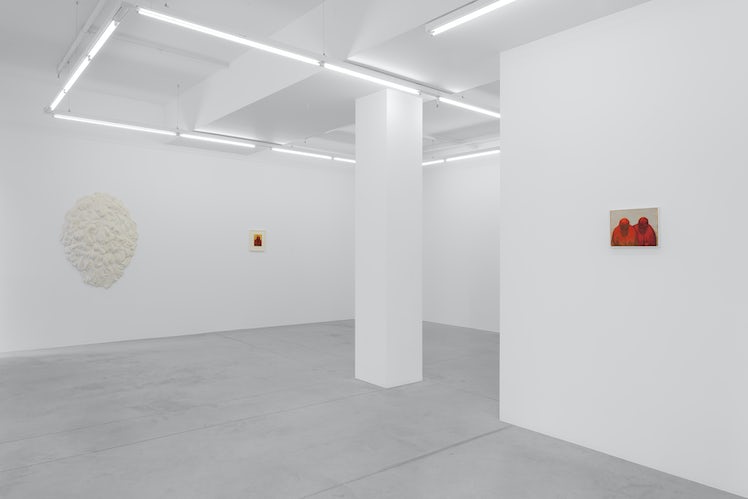 With his work, the artist appears to want to capture something that he actually doesn’t understand, something that exists outside our own environment and for which imagery still hasn’t been developed. In his way of looking at the unknown, Tinus Vermeersch very consciously uses a western gaze, as if he is the first and only person that has discovered a new world.

It is not a predetermined idea or image that drives him to paint – it is the act of painting itself.
Drawing and painting techniques that have fallen into disuse ensure that his imagination discerns the potential volumes and depths that are suggested by the lines and surfaces that he applies intuitively at the onset of the painting. Those volumes and depths are reinforced by applying more specific tones and lines that are dictated by the painting itself. They are gradually allocated a role and meaning in a scenic spectacle that slowly appears during a painting process that starts with a coincidental image and ends in a very controlled, dramatic scene.

In his recent sculptures, he continues the imagery that he developed in his drawings. You could view them as props that were left behind, used in the obscure performances that are shown in those drawings, or as ritual objects that have fallen into disuse and were removed from the environment that gave them meaning and a function. That alleged function is expressed in shapes that sometimes suggest protective things like an article of clothing, helmet, fur coat or covering. But due to their ornamental modelling work, the shapes are an unrealistic, three-dimensional reproduction of an assumed existing object or prop.

Their meaning or role within the entity remains open and impervious. The further one penetrates and gets lost in Tinus Vermeersch’s world, the more one is confronted with the many possible interpretations. The pleasure of looking at his work becomes so intense that it becomes a compelling and enduring visual experience.

His works are represented in private collections as well as at the MUba in Tourcoing (F); MU.zee, Oostende (B), Broel Museum, Kortrijk (B), Province of West Flanders (B), Flemisch Parlement, Brussels (B) and the National Bank, Brussel (B)