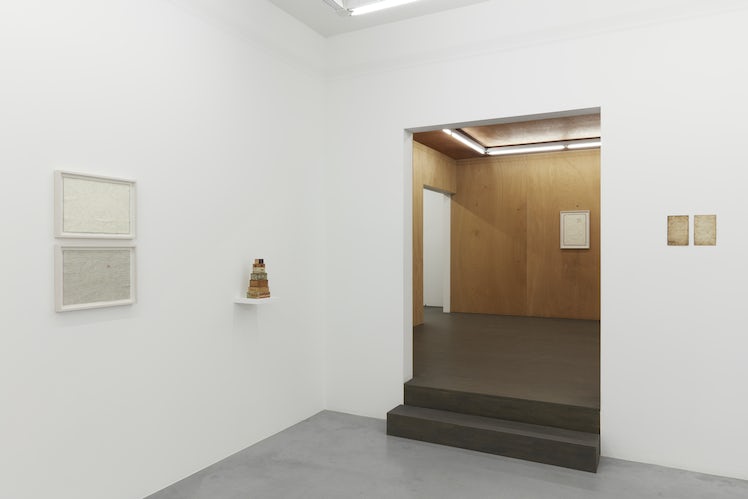 For the drawings in this exhibition, Fabrice Souvereyns uses numerous recurring starting points. He opts for Simili Japon paper of the same size as a medium. A pencil, eraser and cutter are his only tools. He is exceptionally creative with very few resources and the resulting ‘colour palette’. The pencil touches the paper with varying degrees of force, from hard to soft; the lines hover between fragile and deep indentations. Heavy grey tones vie for the upper hand with grey-white tones. He does not plan series in advance; every drawing is unique. Without a story or theme, he spontaneously investigates with flowing lines in an initial phase. An intense observation of plants, the sun, clouds, waves and textile patterns serves as a vague guideline. The work process quickly develops an unpredictable vitality of organic shapes, an interplay between surface and depth, or the utilisation of mistakes he has made. The serrated edges help determine the composition. Occasionally he uses collage and negative shapes. A rhythm evokes syncopation; he answers a previous intervention with a countermovement. Bright areas become dark and vice versa. The artist consciously deviates from obvious virtuosity. Sometimes he steps back. Fragments are erased or drawn over. Geometric shapes insert order into the loose lines. The focus areas change along the way; the subject transforms. As the work process evolves, he consciously steers the drawing in a particular direction. He remains the master of his artistic decisions.

Fabrice Souvereyns (b. 1995 in Tongeren, Belgium) studied drawing at the LUCA School of Arts in Ghent. He has exhibited in CC Scharpoord (solo), curated by Jo Coucke, Knokke-Heist, B; Off The, Grid, Cas-co, curated by Bram Van Breda, Leuven, B; Kunstpodium T, Tilburg, NL. He participated in the fairs Drawing Now Paris, with Tinus Vermeersch and Johan De Wilde, and Paper Positions Basel with Tinus Vermeersch. Under the wings of LUCA his work was selected for the Young Artists 2017 exhibition in LUCA Brussels and De Directeurswoning, Roeselare, B. In 2015 he participated in Expanded Drawing in Voorkamer, Lier, B.

He made a mural in CC Belgica, Huis Van Winckel, curated by D. van de Walle, Dendermonde, B and in Kunstpodium T, Tilburg, NL.

Paul Bourgeois (°1941) has always been and still is a painter, but during his evolution, he stopped using paint and canvas. Trained in the painting department at Sint-Lucas in Brussels, Paul Bourgeois’ equipment includes lead, linen, cardboard and weather-beaten posters. He is not particularly interested in the publicity side of the weathered posters; he is drawn to the insignificant reverse side. Paul’s most important artistic- technical deed is perforating the back of posters, meticulously according to a pre-determined structure. His interventions force the spectator to look more intensely, cm2 by cm2, at soft colour shifts and small nuances. This does not occur in an aggressive, radical way like the work of Lucio Fontana, who uses perforation to show the underlying space in a ‘Concetto Spaziale’. Fontana’s aggressive, destructive intervention is a crucial creative deed for Paul Bourgeois, comparable with the burn marks of Yves Klein and Anselm Kiefer.