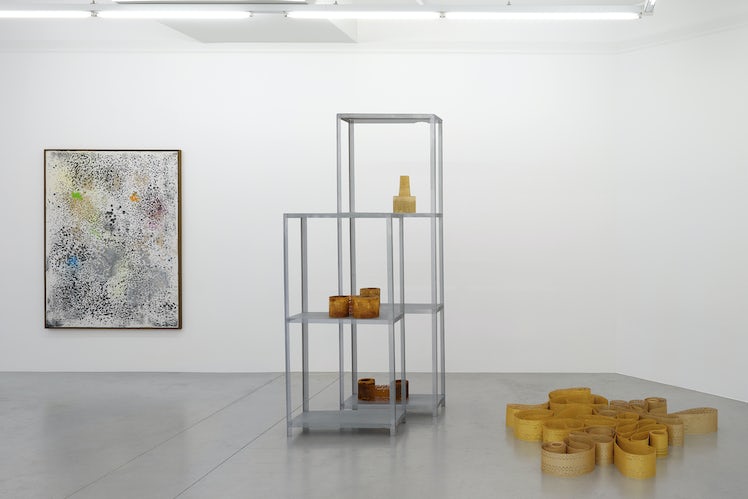 Dominique De Beir (b. 1964) perforates paper, cardboard and polystyrene. She challenged the vocabulary of painting (material, medium and colour) and replaced it with the randomness of gestures and their impact on a surface. This allows her to focus on concepts like scratching and digging, between surface and depth, while exploring physical impact and rhythm. By sometimes pushing perforation to the limits of what the material can handle, she plays with an inherent ambiguity between building and destroying, opacity and transparency, durability and fragility.

Dominique De Beir’s work is characterised by the mise en abyme of a repeated gesture of perforation. The questioning here is of a painterly nature. The gesture is performed on flat media, usually poor and neutral materials such as paper, wax or white cardboard, and sometimes through sheets of carbon paper that leave irregular bluish shadows on the surface.

For Dominique De Beir, the meaning of the work is in a process rather than in a particular representation. Creating is a kind of ‘performance’ that takes place in the solitude of the studio. The result is shown in the work as a suggestion to relive the experience. The poverty of the materials and the simplicity of the gesture confront the viewer with the trace of a physical presence, or the impact of a body, rather than with an image. The work is an incarnation. Dominique De Beir wants to bring the work to life, freeing it from the power of theory and underlining its ephemeral nature. She refers to the artists of the Italian Arte Povera movement who opposed abstract expressionist painting in the 1970s. Their performances and installations showed the need to dive into the painting’s space, to break free from the representation’s space, and to literally re-stage and set in motion a tangible reality.

Dominique De Beir obtained a Higher National Diploma in Fine Arts in Paris in 1992. After following internships with Pierre Buraglio (as a student) and Pierrette Bloch (as an assistant), she obtained a Master’s degree in Graphic Arts from the Université Paris 8 in Saint-Denis. She received the Prix de la Jeune Peinture, which was re-established by the Salon de la Jeune Peinture, in 1995.