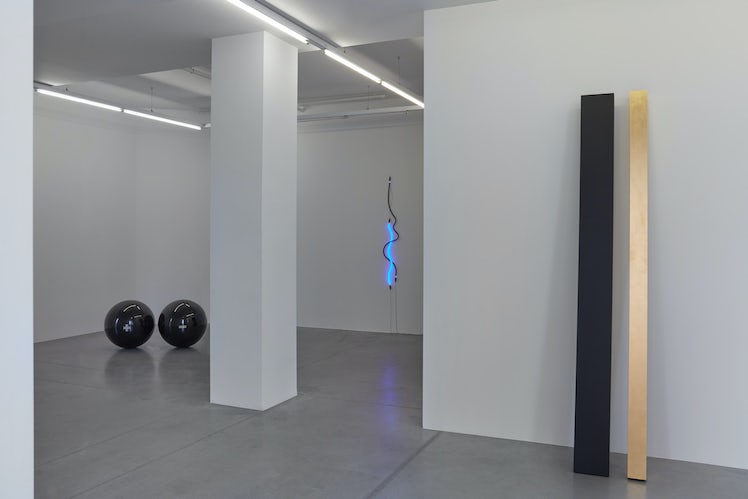 Together with the artist, the gallery selected a number of key works over a period of 50 years. This selection includes almost all the materials that Van Munster used: granite, magnetism, ice and light. He started experimenting with them in 1972. Two light works shown at his first retrospective exhibition in the Kröller-Müller Museum in Otterlo in 1988, and that can now be said to be timeless, appear in this exhibition: Straight Curved and Round Two-Angel from 1985. The works have a clear, subdued character, yet they have retained their powerful aura throughout the years.

Jan van Munster is one of the most remarkable and influential artists in the Netherlands. His work was already on display in all the important museums in the Netherlands in the 1960s. He gained international renown shortly after that. Despite the wide range of materials that van Munster uses for his creations, including stone, steel, granite and glass, it is astonishing how homogeneous his work is on a thematic level. For decades, he has been concentrating with the utmost consistency and continuously changing perspectives on one subject: energy. Temperature, magnetism, radioactivity and electricity are the departure point for his works. He aims to make the invisible visible. He is interested in the tension that exists in the area between opposites, such as heat and cold, light and dark, positive and negative, charge and discharge, compression and expansion, visibility and invisibility. These opposites exemplify the polarity that dominates his work. To summarize this, van Munster has chosen two suggestive formulas, IK and +/-, which are often cited in his work.

Jan van Munster (°1939 in Gorinchen, NL) lives and works in Oost-Souburg, the Netherlands. He studied at the Academy for Fine Arts in Rotterdam and the Instituut voor Kunstnijverheidsonderwijs in Amsterdam, later renamed the Gerrit Rietveld Academy.

In 2002, van Munster received the Wilhelminaring, a lifetime achievement award granted to Dutch sculptors. He was awarded the Deutsche Lichtkunstpreis, an oeuvre prize for light art in Germany, in 2020.