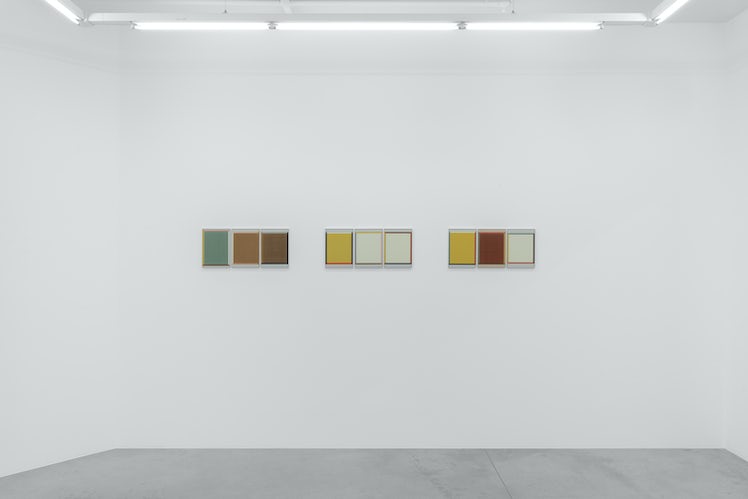 At the center of his new solo exhibition, titled “Fernand”, Johan De Wilde (°64 Zele, Belgium) presents two new series of works. The first of which, titled History 241 – Faber vs. Pablo, can be described as a sort of dual confronting the color chart of the color pencils produced by Caran D’Ache, the Swiss company founded in 1915 in Geneva, with the color chart of the color pencils produced by Faber- Castell, the German company whose roots stretch back to Nuremberg of the 17th century. History 241 – Faber vs. Pablo is composed of twelve panels. Each panel measures 15 × 10.5 cm. The color gradient of each company occupies six panels, where each color is represented by a horizontal stripe of 0.5 cm.

In the series, De Wilde exposes the tension between the purely physical, sensual, optical, phenomenological, chromatic, and the historical, conventional, commercial, industrial, etc. The series resonates the effect industrialized color production had on modern art, and particularly on a pivotal figure such as Marcel Duchamp, who, according to Belgian art theoretician Thierry De Duve, abandoned painting due to his understanding that the mass manufacturing of color undermines the authenticity and individuality of the painter. De Wilde’s series situates us back in this historical intersection, while serving as an ironic example of self-referential work of art.

The second series, titled Pars Pro Toto (in Latin, part of the whole) consists of nine panels divided in three groups of three panels each. As in most of De Wilde’s works, the format of each panel is A4 (29.7 × 21 cm.). The series is a group of monochromes surrounded by a frame whose four sides are drawn in a different color. The chromatic organization of the nine panels is based on the colors in the first nine frescoes executed by Fra Angelico between the years 1438 and 1450 in the San Marco Convent (Convento di San Marco). Each of De Wilde’s nine panels encapsulates the colors found in each of the nine frescoes. The series can be read as the aestheticized remains or residues of Fra Angelico’s frescoes, and in this sense, it implies a post-apocalyptic state of things. In the context of De Wilde’s ongoing practice, Pars Pro Toto shades a light on the underlying post-apocalypse that runs throughout his entire oeuvre, where objects are severed from their background and lose their element of unequivocal significance to the point they become like a secret, free-floating, superfluous, code.