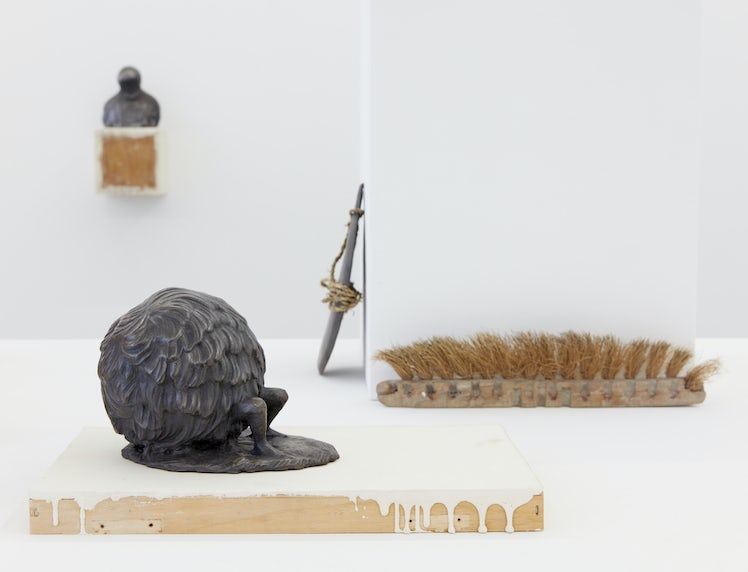 Has the corona era impacted your work?

That’s difficult to say because I’m still right in the thick of it. Sometimes you only notice later on that a change of environment or mood has influenced your work. I always express the same shapes in my work, but in a different guise. Over the years, I have created my own world with several archetypes that transform constantly. The impulse that paves the way for such a change often comes from exploring a different material, which is also a kind of external influence. While the world that I depict seems to be unrelated to reality, afterwards I often find that reality has had more impact on my work than I realised at the moment.

An influence that the corona era has unquestionably had is that there was suddenly more time. I have wanted to make more sculptures and to work with tempera on canvas on a large scale for quite a while. Kneading and baking the clay, preparing and stretching the canvas: it’s kind of a necessity for me to have control over these things from the beginning, but that requires time. And now I suddenly had it.

What is the role/responsibility of an artist?

I don’t really have an opinion about that. Everything is probably analysed for usability too much. I suspect that artists see differently, have larger antennas, and hear the prevailing tone more easily despite the daily tumult. Bringing that underlying to the surface in the form that is closest to him or her: perhaps that could be a role for the artist.

Can you explain how you prepared for this solo exhibition?

Initially, I was looking for a way to break away from the very layered (and slow) manner of painting. A series of small landscapes in oil on panel painted wet-on-wet seemed like the appropriate way to do that. The approach was liberating, but the results that I was ultimately satisfied with were those that I had gone over multiple times. Apparently, that layered procedure is inescapable in my case because otherwise, I don’t reach the point where working method and subject matter seem to coincide. In that respect, I had come to a bit of a dead end.

Then corona arrived, and that gave me time to get back to sculptural work and to try painting on a larger scale. On the one hand, a series of small ceramic sculptures arose that are almost a three-dimensional translation of scenes and figures that also appear in my pen and ink drawings. They are reminiscent of little chinoiserie sculptures, related to rococo, with their ornamental shapes, focus on materiality, stylised nature, and anecdotic style. More refined forms also arose as a counterweight: archetypes like haystacks, huts and other veiled shapes were condensed to their essence. The austere shapes meant that lots of attention was paid to the workmanship. Polishing and a baking process in which smoke – and coincidence – played a significant role, resulted in a reflective skin that doesn’t immediately reveal the object’s real material. Sometimes I added elements with wood and rope, which evoke a kind of functionality. With their natural material and open structure, they contrast with the hermetic, metal shapes. You could see them as a type of “antennas” to reality.

With the paintings, I sought a connection to the sculptures, both through the way I painted and in their form. The work process also plays a big role. Just like the seemingly banal activities of my characters, the preparatory acts of making paint, preparing the canvas, et cetera are a kind of ritual for me. With each layer, it feels like I am adding material as well as meaning. That activity gives me the feeling that I am making an image as well as an object. I stretched the canvas with rope in a wooden frame, and this resulted in a frayed edge with holes. That remains visible in the final result. It doesn’t only show the importance that I attach to all those layers, but it also functions a bit like the sticks in the sculptures.

I consciously chose a limited tonality and for a way of painting that is close to sculpting, whereby I penetrate the subject a bit deeper with each layer. I love it when the image and the meaning slowly reveal themselves, but preferably not entirely. The nuances in whites and mutual shadow tones emerge completely only if you look long enough. Your eyes require time to adjust to the minute differences in tone.

Devising and setting up the exhibition was a quest for different forms of closeness and openness, material and illusion, agility and heaviness, and it doesn’t lack humour. I tried to make very diverse shapes that give you the feeling that they all belong to the same imaginary world. Who knows, perhaps I am saying something about the external world.

Is the atelier a source of inspiration, or does that lie somewhere else?

The atelier is mainly a stimulating place because everything is in function of the work. Real inspiration chiefly comes while working and by being busy with the materials. Materials with a long history of use are very inspiring. My visual language is influenced by things that I have stored consciously or unconsciously. That can be almost everything that crosses my path. Sometimes it’s something that only lasted a second, but it can also be something that I have been in contact with for years. I like being in nature. I am very attracted to shapes in which time is visible, but I am even more attracted to the all-encompassing transience of nature, tangible and intangible, both over an extensive period of time and within one season – and in all of that the ever-busy human being.