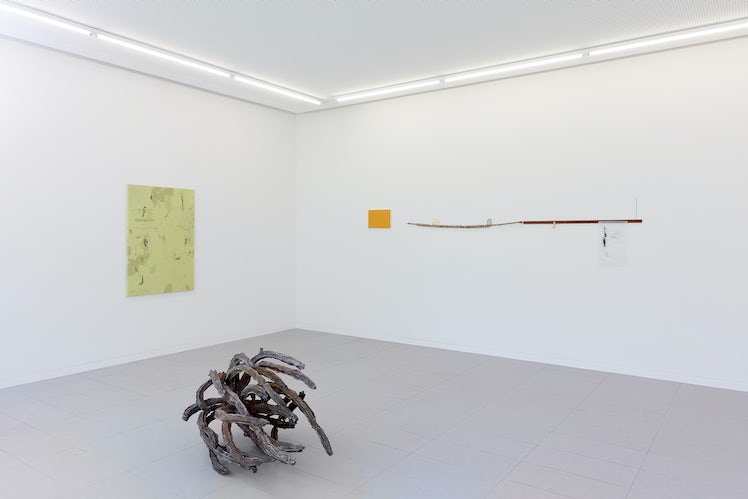 Sara Bjarland’s practice revolves around “post-consumer materials”, also called waste. For her sculptures, installations and photographs, she collects discarded objects and materials at trash piles on the street. Her making process is highly intuitive and through different methods like appropriating, altering or casting the objects in other materials, she tries to extract new meanings or suggest other possibilities. An old umbrella reminiscent of an animal skin, sun blinds collapsed like dead palm trees, a shrivelled cactus looking like a dead animal – she is interested in the grey area where the domains of object and organism, the made and the born, are blending and blurring, and lifeless matter seems to spring to life, only to start fading again.

Bas van den Hurk combines and manipulates multiple spatial co-ordinates through different mediums in a given context, most often an exhibition room. In an era where the potential to make new remarkable gestures seems exhausted, he instead productively researches discursive networks, modes and models of painting, manual (re)production and installation. The work pulls back and forth in a permanent tension that on the one hand strives for radical autonomy and on the other is aware of the fact that it is part of a heteronomous network of texts, histories, modes of production and commodification.

For their joint exhibition Latent Memories, Sara Bjarland made new sculptures consisting of bronze casts of dead plants, and Bas van den Hurk new paintings and mural installations. The works come together in a minimal setting that emphasizes the subtlety and vulnerability inherent in the works. The title of the exhibition refers to the idea of a mutual relation between the material and the immaterial, between that which is actually there and that which you can dream or fantasize about, between that which is made visible and that which lies beneath and is only there as latency.

Sara Bjarland (°1981 Helsinki) lives and works in Amsterdam. Recent shows include Crumple, Fail, Faint, Fall, at Sinne Galleri Helsinki (2020), Constant Eruptions at Hopstreet Gallery (2020) and Uncertainty and ground Conditions at DASH, Kortrijk (2019). Her work is included in Frédéric de Goldschmidt collection (BE), Pieter en Marieke Sanders collection (NL) and Jenny and Antti Wihuri foundation collection (FI) as well as several private collections. In 2019 she published her first monograph Groundwork with Art Paper Editions and in the same year she was shortlisted for the Below Zero Prize, organised by the Finnish Institute and Beaconsfield Gallery in London. In 2020 she received the William Thuring Prize for Finnish midcareer artists.

Since two years Bas collaborates with Jochem van Laarhoven on a research about the relations between fine art and theatre. During their residency in the fall at the House Van Wassenhove (MDD) they will produce a film together with the theater director Suze Milius, among other cast members, and will feature textile props recently produced by the artists at the Frans Masereel Centrum.