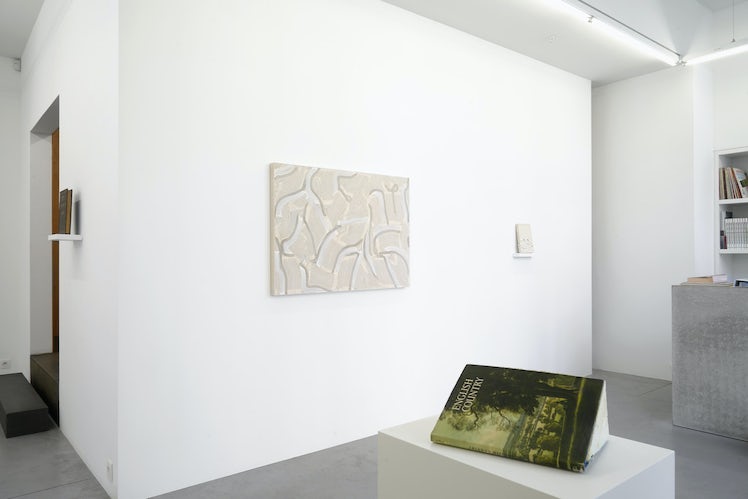 The show is called ‘lode’. I was beginning to think of making a series of ‘paintings’ with books. I was thinking of the text as brushstrokes, some of the sections were deliberately left as veins or ore in the body of the work. Another word in English for ore is lode, often referring to veins of gold or other metals and semi precious stones.  The compositions are dense and chaotic, purposefully so as I wanted them to have a slightly accidental feeling. I remember as a child being fascinated by the mineral and geology galleries in museums. Often there would be polished rock samples showing the strata, imperfections and inclusions in different rock samples. This seemed very appropriate in terms of how I was beginning arrange the compositions and to see layers of information and text as I cut the books on a guillotine. It’s also a way in which I approach the vast profusion of published information that prior to my bringing it to the studio was destined for the pulp mill.

There is also another body of work installed in the box space. This work extends and deepens approaches I have been taking towards information and language as it appears with the format of printed and bound material. Some of the approaches are Obscure and oblique, some more illustrative. Sometimes the book is used as a plinth or armature to support other readings that cut across the conventional narrative. Sometimes the book is treated as if it were vacant or unused clay at other times very specific references are loaded beside or inside the books particular meaning.

Jonathan Callan is born in 1961 in Manchester. Lives and works in London.