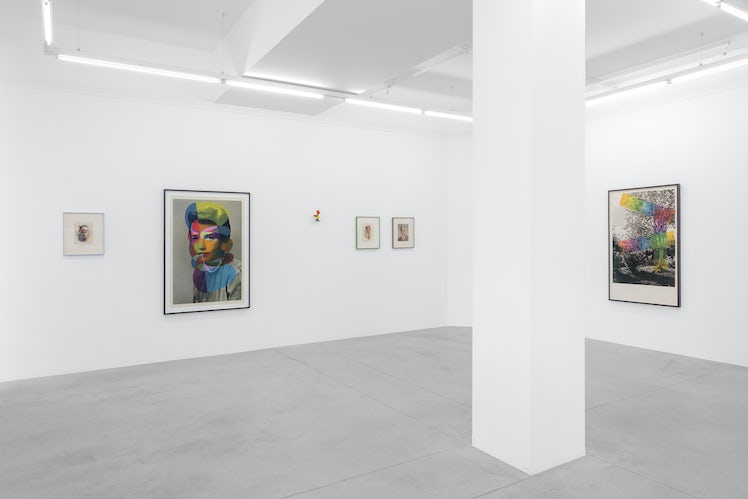 Hopstreet Gallery is very proud to welcome Julie Cockburn (b.1966, London) for her first solo exhibition in Belgium.

The title “Ma” is a Japanese word that can be roughly translated as “gap”, “space”, “pause” or “the space between two structural parts.”

Having recently discovered Ikebana – Japanese flower arranging – Cockburn was struck by the processes used in this traditional and mindful art form and was intrigued by the extent to which she was using these processes in her own working practice.

Firstly, formal composition plays a key role in the original photographs that Cockburn chooses. In addition to colour, texture and meaning, composition is also fundamental to the decisions she makes when executing her transformations. The “Ma” still lifes go some way to illustrate this. Whereas many of Cockburn’s embroidery works are meticulously planned on the computer, here each bouquet was added to, freehand, attempting to achieve satisfying form and balance. Each one began differently, and therefore each composition was the result of its own gradual process.

One can read “Ma” in a more emotional way in Cockburn’s portraits. Compositionally elegant, these orphaned photographs are often aged and discarded, found in junk shops or sold in job lots on eBay, and missing their family history. Cockburn refills this ‘gap’ with her own narrative, using graphic embroidered motifs, and adding whimsical, enigmatic titles.

The “Cousin Tree’” large-scale, altered prints, also echoes Japanese tradition. Using the blossom tree motif as her canvas, Cockburn has painted an emoji. Poignantly comi-tragic and flocked with a soft, pollen-like surface, the irreverent freehand mark-making is a modern take on traditional calligraphy.

Cockburn’s whole practice has a meditative quality – one can see the attention to detail and hours required for the perfected needlework. In a tumultuous world where one is bombarded daily with the fragility of order and life itself, perhaps it is the space ‘in between’ where we can find solace.