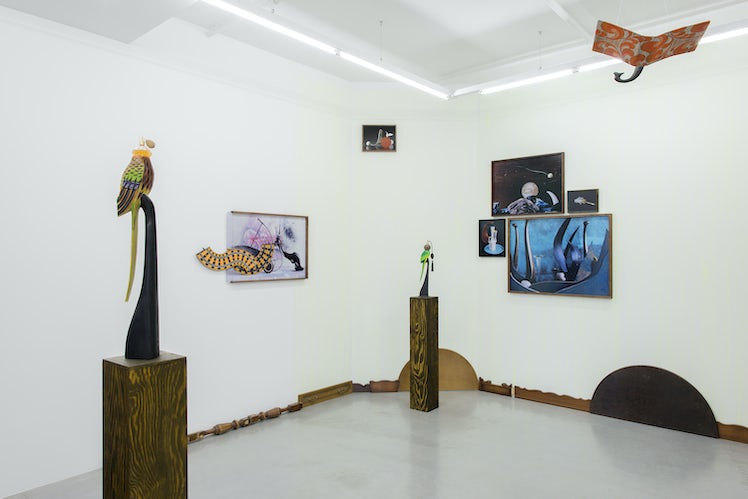 The landscapes and creatures that Hamburg-based artist Thorsten Brinkmann brings together for his second solo exhibition at Hopstreet Gallery in Brussels play in an unusually gloomy way with the classical art forms of still life, landscapes and sculpture. Using items found in flea markets, on rubbish tips or in junkyards, Brinkmann creates nature scenes brimming with atmosphere, spanning genres to harmoniously combine everyday things, furniture parts, containers or vessels to produce a mysterious narrative.

‘Pogonia’ (2016) draws the observer into an exotic, bluish shimmering wood. Contoured chair legs and glass vases combined with curved sawn wooden boards turn in the photograph into all sorts of trees and plants. ‘Gluno’ (2016), on the other hand, depicts rolling hills made of objects in differing shades of brown, like a battered leather bag, chair backs and other wooden furniture, coherently woven together with masterly verve. The sensual playing with heterogeneous materials and surfaces is again taken to extremes in the assemblage ‘Carrera Rousseau’ (2016): wooden ornament, polystyrene, metal bars and parts of a racing track are combined to create a formally diversified total art work which confidently takes its place in the tradition of classical landscape paintings.

Brinkmann, who is known for his equally ambiguous and humorous work and exhibition titles, once again makes the most of associative possibilities with the name ‘Paradieclipse’. References to the Garden of Eden recur here, that place of longing revered since the early 19th century in countless Romantic poems, myths and sagas – the ‘German Wood’, which became the epitome of Germanic-German culture among other things through the Nibelungenlied, stylized to form the national myth.

The ‘Eclipse’, on the other hand, casts a shadow over this ideal. It is no coincidence that in this context, suns are a recurring motif. Both in ‘Peak’ (2016), depicting a monolithic mountain with a pink sky, and in ‘De Mooning’ (2016), this heavenly body is given a central role in the composition of the picture.  They recall the landscapes of surrealist Max Ernst, ‘Die ganze Stadt’ (Entire City) (1935/36) or ‘Grätenwald’ (Fishbone Forest) (1926), which also play with the symbolic power of the sun (or conversely with that of the moon). After a series of these utopian jungle images and ruined cities, in 1937 Ernst created the painting ‘Der Hausengel (Der Triumph des Surrealismus) (The Angel of the home or the Triumph of Surrealism)’, which depicts a hybrid creature dancing ecstatically in a desert landscape. Brinkmann has fashioned a similar creature: ‘Skrillo’ (2016), a hybrid of a flying being and a fighter, who performs a strange ritual of dance and threatening gestures in the eponymous video. Initially still subtle, then increasingly agitated, as the ceremony progresses Skrillo’s ‘feather coat’ ruffles more and more vehemently and jerkily. A simple film trick makes the figure seem oddly heteronymous, subject to an inner power. On the soundtrack, noises played backwards and therefore alienated, such as the rustling of the costume (a used Hawaiian parasol), the clanking of the ‘helmet’, scraps of conversation and the buzzing of a fly, further strengthen the feeling of unease.

But that is only half the truth. This time, Thorsten Brinkmann works with an imagery, which addresses the big, occasionally pathetic subjects of nature, wood and paradise – but he does not do so without a twist. On several levels, the artist offers us a dense network of references to art-history and pop-culture, commented at many points with humour – comparable to Shakespearean comic relief. For instance, ‘Skrillo’ is admittedly eerie on the one hand, but we can laugh at him too, at the way he rustles more and more fiercely with rage or when his ‘wings’ turn out to be carpet beaters as the video progresses. The Shaman warrior is not the only living creature that the artist introduces into his personal version of a dystopic blueprint for the world. Chimeras, half parrot, half perfume bottle (‘Papagon’, 2016), pterosaur (‘Kloppfar, 2016), ceramic wolpertinger or the ‘Röckler’ (2016), a crossbreed of table legs, artists shoes, lamp and antlers – they all inhabit Brinkmann’s paradise, making it a mystical place that remains ambivalent and open to different interpretations.

Christiane Opitz, cultural scholar. Lives and works as a self-employed curator and author in Hamburg.