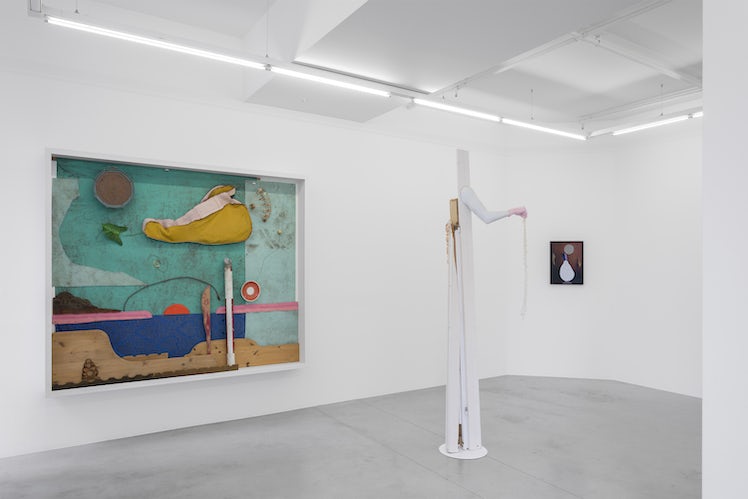 The dystopic landscapes and still lifes that Hamburg-based artist Thorsten Brinkmann brings together for his third solo exhibition at Hopstreet Gallery in Brussels play in an unusually gloomy way with the classical art forms of still life, landscapes and sculpture. Using items found in flea markets, on rubbish tips or in junkyards, Brinkmann creates nature scenes brimming with atmosphere, spanning genres to harmoniously combine everyday things, furniture parts, containers or vessels to produce a mysterious narrative.

“ Brinkmann investigates in his works the margins of both the body and the object and consolidates these into body-object montages which create an area of conflict with a healthy dose of humor. Brinkmann’s investigations have less to do with being threatening—he leaves this to the real threats coming from the worlds of digitalization and bodily manipulation—and offer grotesque interpretations of the body-object relationship which are generated by collisions between different normative systems. Brinkmann finds the similarities, the connections, and also the absurdities in body and object, and uses these to deconstruct the hermetic spheres in which both are ensconced. This results in humorous pairings, incongruities, and transpositions between the two areas and a game which, while restrained, he plays with bravado. The simplicity of the means that form the basis of Brinkmann’s artistic work—the pragmatic production techniques, the unpretentiousness and the obvious double meanings—both contributes to the structure of these displacements and adds an extra dose of humor.

Thorsten Brinkmann’s artistic engagement with body-object relationships, which has now continued for around 15 years, may well be a manifestation of an ongoing “modern crisis in the subject-object relationship.” His works address the excesses of capitalist production and the resulting throwaway society, the beatification of the world of goods, and the prosthetic fusions of body and object. However, the key point is that he does so gently by using the element of humor. The constantly reevaluated relationships between body and object, subject and everyday life in Brinkmann’s work take the form of playful impulses that demonstrate a realignment and illustrate the intelligent way out offered by humor.”

The big vitrine ‘Hornschuchl’ is an assemblage filled with found objects, almost all coming from the inside of an apartment and showing a well-constructed romantic landscape outside with a neon-orange sun at the horizon.