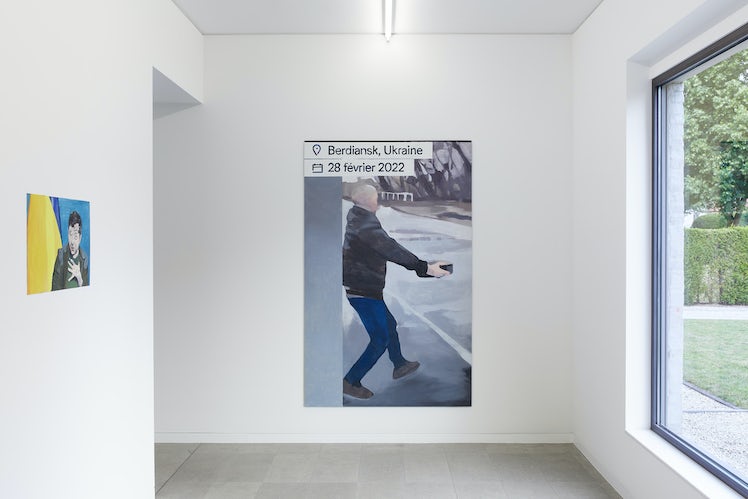 “In the collected works of Robert Smithson, Virginie Bailly came across the idea that our minds and the earth are in a constant state of erosion “(…) mental rivers wear away abstract banks, brain waves undermine cliffs of thought, ideas decompose into stones of unknowing, and conceptual crystallizations break apart into deposits of gritty reason. (…) Her artistic practice translates as a flowing river where the water leaves sediments on the banks of the mind. Unlike most artists, Virginie does not act as an observer. She doesn’t look at reality from a distance but stands in the middle of the mud of reality. This gives her the opportunity to connect and shape all kinds of influences from within so that the experience and the time aspect form important parts of the painting process. Her paintings are like mental landscapes in which splinters of reality, motifs, current events and fragments of art history crystallise into ephemeral residues like the washing waters of a river. (…)”

Floris Dehantschutter, 2019, excerpt from the text ‘A Sedimentation of The Mind’

Virginie Bailly’s ‘landscapes’ display an infinite diversity of ingredients, mainly painterly, but others too. No possibility remains unused. In the large formats everything demands attention to the same degree. ‘Minor’ events take place everywhere. Smears, lines, bands, touches, imprints, scribbles, strips, splashes, even barely visible figurative elements (brick walls, staircases, the suggestion of a human figure etc.), plus cuttings stuck on with glue. Flaky, cloudy, sharply outlined, tangled, clear, taut, organic… The painting is all proliferation, the intoxication of things, a tribute to abundance.By fragmenting the painterly ingredients as much as possible, multiplying them, making them independent and diversifying them, she makes the summit unreachable or, at least, makes the way there long. How does abundance itself generate the unity of the painting, or how do they mutually create each other, dialectically?

Something miraculous must happen between these ingredients. In the invisible intermediate space that links these elements together.

The unity is broken and restored. The painting is both at the same time. The between makes it into a pictorial field. This gives the painting space a charge of energy. The space of the painting depends on the tendency towards linkage in that which remains separate. Everything is in an odd way stretched towards unity. This energy flows through the painting. It is an emergence into unity in a state of genesis.

Just as the mountaineer never gives up before he reaches the summit – however much hardship it costs him – the painter endeavours to achieve the painting. By constantly leaving out, adding, shifting, breaking up, rearranging and patiently looking, she decides at which moment the miracle of the painting has occurred. The summit fever has led to the unreachable point. The feeling that dominates at that moment must be comparable to that of the mountaineer who sees his efforts rewarded.

In a situation of life and death, would painting last? In her recent work, within the context of the current war in Ukraine, Emmanuelle Quertain questions the role of a painter, as well as the role of a painted depiction, appropriating the images that circulate in the media and drawing parallels to the genre of history painting.

Working with the images of Volodymyr Zelensky, the President of Ukraine, Quertain refers to The Death of Marat (1793), a depiction of a revolutionary martyr by the neoclassical painter Jacques-Louis David.

Jean-Paul Marat, a political figure and journalist who aligned with the Jacobins during the French Revolution, was assassinated by Charlotte Corday in 1793. The assassination took place while Marat was lying in a bath to soothe a rash caused by a severe skin condition. Invited to record this historical moment, David depicts Marat within the conventions of his genre, characterized by classical and idealized forms. Although Marat’s death represented a troublesome legacy to the leadership of the various factions of the revolution, David’s visual recording of the historical event had a vast public impact in the years to come.

In his letter to Antonioni, Roland Barthes speaks of the subtlety of meaning as a crucial and political element in art, “precisely because meaning, from the moment that it is fixed and imposed and ceases to be subtle, becomes an instrument, a counter in the power game. To make meaning subtle is therefore a second-level political activity, as is any attempt to crumble, disturb or undo the fanaticism of meaning.” In her practice, Emmanuelle Quertain carries a similar sensibility. For her, the role of an artist is not linked to self-expression or a need to express an opinion, but rather to the urgency to contribute to public life. Conceived as a focused study of visual reality through a durational act of looking, the painting practice of Quertain, first and foremost, seeks to respond to the world. Quertain paints in oil and aquarelle on aluminium and wood. The spatial flatness, enabled by the thin aluminium surface, sustains the proximity of her painted images to photography in terms of how the human eye experiences an image.

Uncertainly searching her own way into the history genre, Quertain considers the public responsibility within the task of the painter. In the academic tradition, the history genre was long considered the highest form of painting, often focused on biblical and mythological themes, or the grand narratives and values of the times, in other words. Today’s images of history, on the other hand, are part of an ever-accelerating stream of information, devoured at rapid speeds through media technologies. The body of work presented in this exhibition reflects an attempt to slow down consumption and drive attention to how an image is constructed. Painting as an image mediated by an artist’s eye and hand always involves an extent of distortion. By focusing on portraiture, on constructing images of a face or of bodies in painting, Quertain seeks to bring out the question of humanity and what constitutes it. The works address the current war as an issue that concerns us all, as it complicates the idea of living together, encompassing a struggle for self-determination of a population and for a future of democracy.

The portraits “Zelensky I – 2019 elections” and “Zelensky II – February 2022” are studies of two official images of the Ukrainian president. The first image is the portrait issued upon the president’s election in 2019, while the second is an image released in the press shortly after the war escalated in February 2022. One may compare the significance of Zelensky today to that of Marat during the French Revolution, and the motivations for painting his portrait to the motivations of David in his own time. At the same time, one may find the elements of an artist, and thus the answers to how an artist can respond in times of war today, in Zelensky himself. The former actor and comedian, who paradoxically played out his own destiny in the comedy television series Servant of the People (2015-2019), has demonstrated inventiveness and even humour in his responses during the war that could be easily characterized as artistic mastery, containing an ability to crumble, guide, shift and consolidate meaning.

Contesting her own act of portrait painting, in another depiction of Zelensky, Quertain includes a tweet containing an image of the president’s family with his alleged comment, stating: “I do not want my picture in your offices: the president is not an icon, an idol or a portrait.” Meanwhile, the family depiction – the president with a wife and a son and a daughter, laughing, with superhero masks painted on their faces – so recognizably appealing to the population, is almost an antithesis to a royal family depiction.

“Berdiansk, Ukraine, 28 février 2022, la mine à mains nues” depicts a frame from a video that became viral in the first week of the war, in which a Ukrainian man is seen relocating a mine with bare hands from the road into the woods, taking slow steps not to destabilize the lethal object, but simultaneously smoking a cigarette. The smartphone-format image, blown up to real human size, portrays the civilian spirit and the response while highlighting the role social media and the internet have played in spreading the reach of the imagery of the war in Ukraine. The puffer jacket worn by the anonymous man in the video resembles the puffer jackets worn by the protagonists in the painting “Chinese metro: Covid 19 first image “, based upon an image that circulated the internet during Covid of people wearing plastic bottles as face masks in public transport. The image encapsulates another aspect of this period of time and adds a contrasting layer to the artistic intents embodied by the portrait paintings.  Paired next to it, stands a replica of Francisco Goya’s Three Salmon Steaks, originally painted in 1812. The still-life painting, depicting cut-up pieces of fish suggestive of violence and blood, bears reference to Goya’s dark vision of humanity, reflected in his socially critical etching series Los Caprichos.