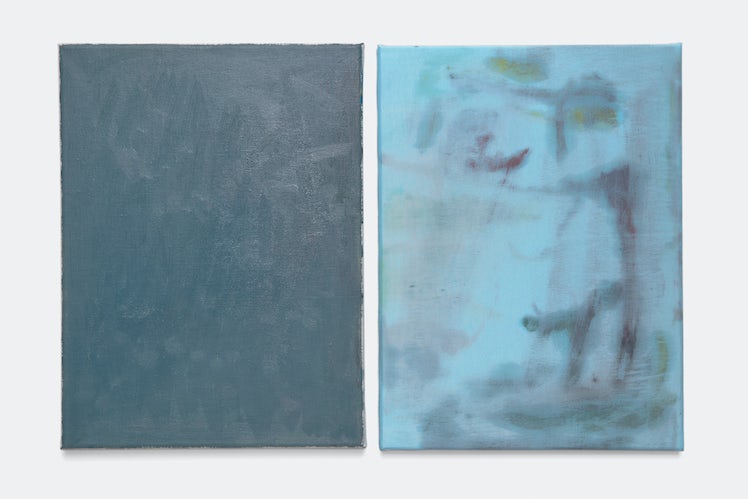 Bas van den Hurk combines and manipulates multiple spatial co-ordinates through different mediums in a given context, most often an exhibition room. In an era where the potential to make new remarkable gestures seems exhausted, he instead productively researches discursive networks, modes and models of painting, manual (re)production and installation.

Van den Hurk’s practice circles around questions of ‘transitivity’, an influential term borrowed from David Joselit’s ‘Painting Beside Itself’, which describes the ability of ‘expressing an action which passes over to an object’. The work thereby pulls back and forth in a permanent tension that on the one hand strives for radical autonomy and on the other is aware of the fact that it is part of a heteronomous network of texts, histories, modes of production and commodification.

Exhibitions are made into interstices vibrating between such wide ranging media as painting, fashion, theatre, installation, performance and architecture. Angled through spaces, works divide and create a scenography of architecture, costumes and paintings that allows one to move around and find different vantage points providing additional layers. Viewers thus become mutual witnesses to a rhizome structure, negotiating the meaning of it, without ever totally ‘having’ it.

Since two years Van den Hurk collaborates with Jochem van Laarhoven in an ongoing research about relations and boundaries between fine art and theatre. They work with a ‘network collective’ – a term coined by Okwui Enwezor – moving more and more in the direction of an ongoing collaboration with a divers group of actors, dancers, artists, theoreticians, directors and performers. Their practice reflects for them important issues in which classical modernist quests are reflected within a contemporary context: How can we live together? How do we negotiate that? How do we collectively create our environment? These questions are negotiated over and over in an ongoing dialectic of making, thinking and exhibiting.

Van den Hurk teaches contemporary theory and research at the BA and MA of AKV/ St.Joost and is a regular lecturer at different academies and institutions in the Netherlands and abroad. Van den Hurk is also the co-founder and co-director of the nomadic artist platform Whatspace.